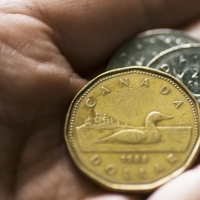 The Canadian dollar strengthened against its U.S. counterpart on Friday, lagging behind some other commodity-linked currencies but recovering from a one-month low the day before as investors grew more hopeful about a U.S.-China trade deal.

Canada is a major exporter of commodities, including oil, so its economy could benefit from an improved global trade outlook. U.S. crude oil futures settled 1.7 per cent higher at $57.72 a barrel.

There is “a bit more of a pro-risk bias in the markets that has lifted the commodity currencies generally but CAD has been left behind in that move,” said Shaun Osborne, chief currency strategist at Scotiabank.

Commodity-linked currencies, such as the Australian dollar

and the New Zealand dollar posted stronger gains than the loonie, up 0.4 per cent and 0.3 per cent respectively.

Canada’s inflation report for October is due next Wednesday and September retail sales data is due next Friday, both of which could help guide expectations for Bank of Canada interest rate cuts.