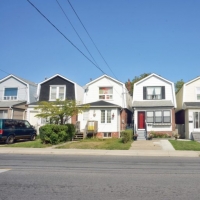 One Toronto neighbourhood that’s safe, fun, and affordable is Rockcliffe-Smyth

Every day seems to bring new news about the rising cost of buying a home in Toronto. This can make many of us feel like we’ve already been priced out of the market and may never own our own home—at least not without taking on a mortgage so large it prevents us from enjoying life’s small luxuries, like vacations and nights out to dinner and a movie. We might consider buying a home outside the city, but that means hours of our day spent commuting instead of spending time with family and friends.

But there are still some areas of Toronto that are more affordable than most, and with some help from the right financial partner, owning one of them is still a possibility.

One Toronto neighbourhood that’s safe, fun, and affordable is Rockcliffe-Smythe—possibly the last place in town where you don’t have to be a millionaire to own a detached home somewhat near the city core. Rockcliffe-Smythe runs from around St. Clair Avenue West north to Eglinton Avenue West, and from Weston Road to the Humber River. What was once farmland became a major development in the 1920s when the area was converted into a gravel pit. Once the pit was spent at the end of the Second World War, developers began building residential homes in the area, mainly for returning servicemen and their families.