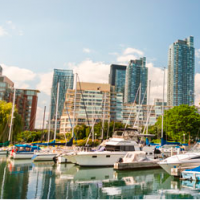 Share
About Toronto
Toronto is the capital city of Ontario and the largest city in Canada. This diverse city is located on the shores of Lake Ontario where ample outdoor activities await including sailing, kayaking, and boating. Home to three universities and various colleges, Toronto offers a significant amount of educational and employment opportunities.

Toronto's growing economy is signified by the new construction and renovations taking place throughout the city. As one of the most popular real estate markets in Canada, many families choose to live in the Greater Toronto Area where transit is easily accessible by using the subway, streetcars, busses, and Go Transit trains.

The CN Tower, situated downtown, makes Toronto's skylines one of the most recognizable in the world. Toronto's vivid and diverse atmosphere and booming real estate market make it a great place to search for your next home.
Fun Facts